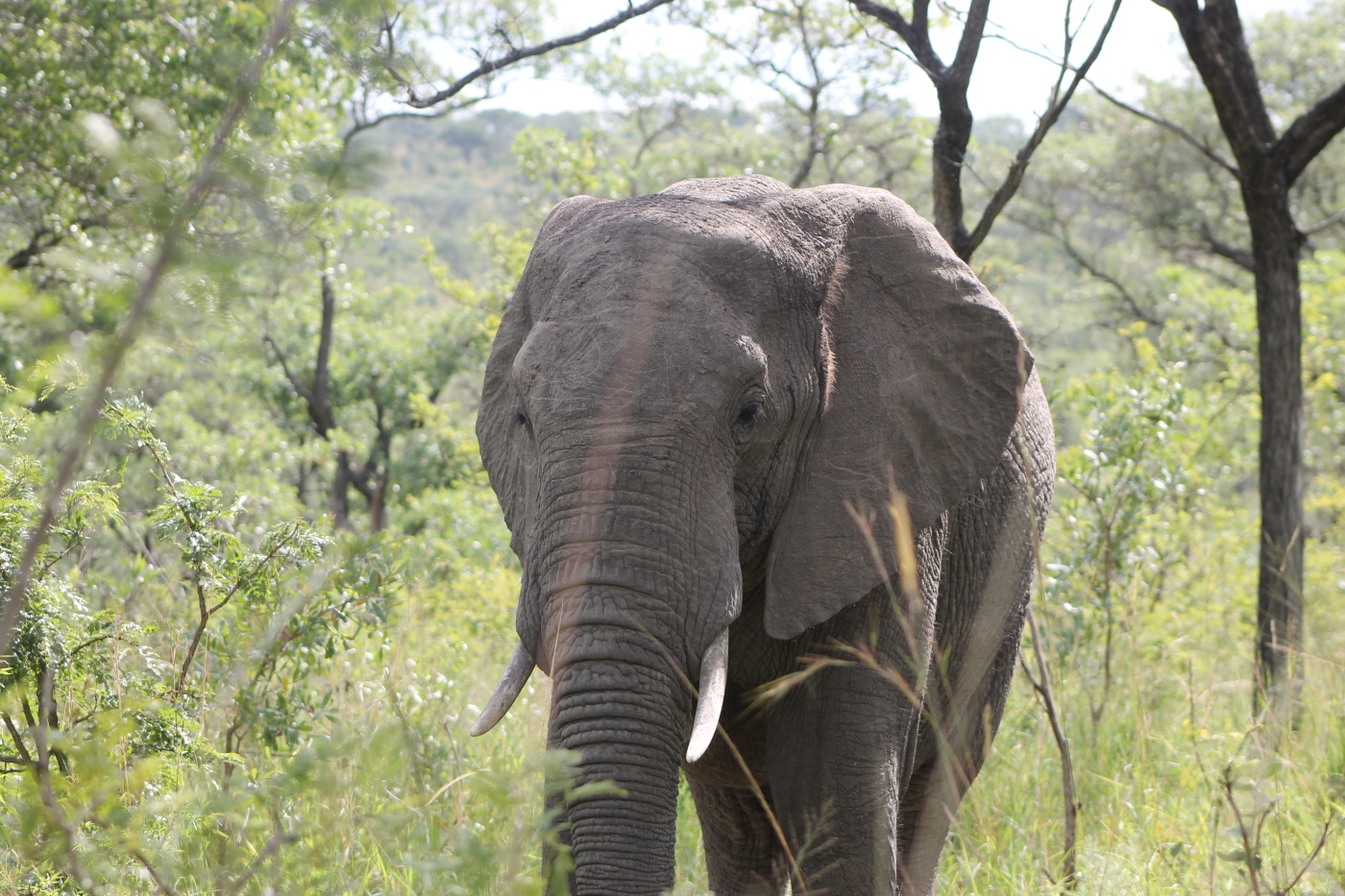 It is very difficult to appreciate just how powerful an elephant is until you encounter one in the wild. I was overseeing a conference near the Kruger National Park this week, and thought it would be a wonderful opportunity for me to take some leave and spend some time with Nathan (my five year old son) in the Park. The African bushveld is my idea of paradise, and I want to give Nathan the opportunity to fall in love with it, just as my father gave that opportunity to me. I have spent a lot of time in the bush, but it never fails to surprise and enthral me. How could I not let my son experience what is undoubtedly one of the most beautiful legacies of living in Africa?

On the first afternoon in the park, driving towards our campsite, we came across a massive bull elephant in the road ahead. I am very cautious around elephants: I have seen pictures of what they can do to cars, so usually I keep a healthy distance between my car and the elephant. But we wanted to go in one direction and he wanted to go in the other. I certainly wasn’t going to argue. But I didn’t want to reverse indefinitely up the road, and he seemed set on remaining on it, so we were going to have to pass one another. I thought it best to let him have the initiative. I pulled as far over to the left as I could and turned the engine off. An elephant has phenomenal hearing and an exceptional sense of smell, and I didn’t want to offend him with noise or fumes from the car. Was it a risk? Certainly. But I have been around a lot of elephants. They are normally pretty clear in communicating their annoyance. They shake their heads at you, they mock charge, they trumpet. Our companion had shown no signs of annoyance, and I reasoned that so long as we didn’t change any of our behaviour we should be okay. So we sat in absolute silence while he lumbered past the car. I could have reached out and touched him as he walked by. It was exhilarating. Afterwards Nathan commented that it was good that we weren’t in one of the safari trucks, because in our car – he reckoned – if the elephant got angry we could just drive between its legs and get away. It wasn’t quite that big an elephant, but that does give you some idea of how large it was. It is hard not to be awed in the presence of such raw power.

Since the beginning of lent, I have been writing attempting to deconstruct our theological houses. It is my belief that Christians habitually confuse God with the way we think about God, Thea with theology. The result is that we worship a version of God that we have ourselves constructed rather than the God that is, and that we remain trapped in our destructive paradigms because we refuse to acknowledge that this is in fact what we do. Instead of continually testing the limits of our understandings, we invent apologetics to defend them, in the belief that we are defending God rather than defending our own conceptions of God. I have argued that one of the key problem areas is in the way we understand the Scriptures and their function. Today I want to argue that one of the key issues we need to address in reshaping healthier theologies is our understanding of certain key terms.

My actions in the encounter with the elephant bull were motivated by several experiences and certain prior knowledge. I have many experiences with elephants – not all of them as charming as this one – and I have listened attentively to the stories of many others about their encounters with these magnificent behemoths. While I am certainly no elephant whisperer, I had a reasonable idea of what to expect from him. He had shown no signs of aggression, and if I made it clear that he had all the power and I would not get in his way, I considered it a reasonable assumption that he would continue to be peaceable. With wild animals, knowing how to interpret the communication is vital. They seldom attack unprovoked. It is easy to miss the signs if you don’t know what to look for.

Now I am not likening God to a wild animal. I don’t believe God “attacks” at all. I am trying to argue that if you don’t know how to interpret the signs, you end up with a very dangerous and potentially violent theology. In other words, just like I made decisions based on inferences drawn from my experience of the nature of elephants, we make theological decisions based on our own experiences (unfortunately not usually very reliable) about the nature of God. Because we expect a violent and vindictive God (based on what we see in some passages of the Old Testament, and on our own retributive conceptions of justice), we construct theologies that codify these expectations and construct behavioural codes to give expression to those beliefs. If you interpreted the signs as loving ones rather than threatening ones, your theology would shift substantially.

I want to focus briefly on three key signs that I think we have misunderstood. The first is the concept of faith. In a post-Enlightenment world, we have conceptualised faith as fundamentally an intellectual activity. What you believe – in other words, the ideas to which you give your intellectual assent – is the essence of faith. I do not believe that is what Jesus understood as faith. Faith, for Jesus, was never an intellectual activity. It was a way of being. Faith is essentially relational.

The second term I think we have a problematic definition of is ‘sin’. When Jesus talks about sin, the metaphors he uses are always shepherd/sheep, lost/found or sickness/healing. What he does not do is speak of crime and punishment. The state of sinfulness is not something that we have done wrong for which we need to be punished, it is a state of being from which we need to be healed, a place from which we need to be recovered. Personally, I like the way Reverend Denny Moody defines sin: “the destructive way we handle our pain.” One does not punish somebody out of a state of sickness. Why, then, do we insist, in our theologies of the cross, on making the Passion about crime and punishment? Why do we insist on understanding the way the cross dealt with sin through a legal framework? That is inconsistent with the way Jesus speaks about his mission in relation to sinners, whom he claims need a doctor (never a lawyer). How might we reinterpret the cross through a healing or recovery metaphor? How would that shift our theology?

The third term is “Kingdom of God”. No Jew, at any point in history, would have understood that term to mean an otherworldy utopia. It would have been understood as a God-centred way of living here on earth. The question around the relationship between sinfulness and the Kingdom is not one of being denied access to another-dimensional paradise on the basis of being naughty, but on the impact of destructive ways of relating to one another in a society that functions with God as the central authority.

If we start to understand key terms differently (and, I think, in a way more aligned with Jesus’s own understandings), our theologies will of necessity shift. Consider the following well-known incident described in Matthew 18: 1-4:

About that time the disciples came to Jesus and asked, “Who is greatest in the Kingdom of Heaven?”

If we take the line of thought in the currently dominant Christian theological paradigm, you would read “turning from sins” as observing laws more closely and “get[ting] into the Kingdom of Heaven” as access to eternal bliss. The whole passage becomes threatening: unless we accept blindly that Jesus is God, submit to authority and behave ourselves, we are doomed to eternal torment.

But that is not, I think, what Jesus intended. Faith is not a matter of what creed we follow, but of how we relate to one another. Thus Jesus defines – in this very passage – “turning from sins” as becoming as humble “as this little child”. Faith and sin are very much relational concepts, not intellectual ones and certainly not linked to personal holiness codes. In essence, Jesus is saying that in a world where God is sovereign, there is no place for people trying to be better than anyone else. It is sinful, according to Jesus, to use faith as a way to belittle others and boost oneself. Faith is about service, about being content to be – like the child – least in the world’s social hierarchies. It is about resisting the urge to leverage power for personal gain at the expense of others.

In some ways, God is a bit like that elephant (I am aware of the limitations of the comparison – please don’t read more into this than you need to), in that he is breathtakingly awe-inspiring, and when we sense his magnitude, his power, it is easy to feel terrified. We then act on those feelings. When we encounter God on the road of our lives, we need to understand that our responses are based on our expectations and perceptions of God, not on God Henself. We respond to the elephant based on what we expect the elephant to be, based on our own experiences, education, or fears. We read the signs we think are there and act accordingly. Nathan would try to drive under the elephant. In his world, informed by cartoons because he cannot really read, that would be a viable course of action. The reality is that such a course of action would be a disaster. Others might rev the engine and speed by, possibly scaring the elephant into fight-or-flight mode, with unpredictable consequences. Others still might reverse down the road until the elephant wanders off the path and they are free to pass. I chose to wait. We would all respond to the elephant we thought we knew.

But in many important ways, God is completely unlike the elephant. There is no conceivable scenario in which God would attempt to squash us. If our fumes or our noise offends God, we will not be trampled. If God follows us as we frantically reverse up the road, it is not out of indifference, but out of a desire to show us that we have nothing to fear (perfect love, as the writer of the first letter of John notes, drives out fear).  If we are hostile to God, we receive forgiveness, in the same way that Jesus forgave us at the cross on the basis that we did not know what we were doing. If we misread the signs, there is no danger. If theology ends violently, it is always because our God-picture is flawed, and because we ourselves are violent, not because God is. Maybe it is time we begun to educate ourselves a bit better about the God Jesus understood instead of trying – figuratively speaking – to drive into heaven in between Hens legs.

For your aesthetic edification, a gallery of photos from our trip. 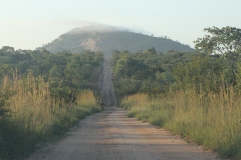 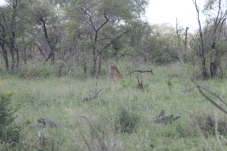 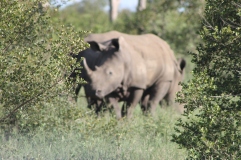 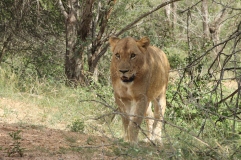 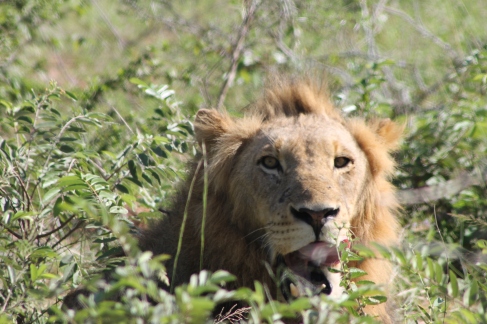 One thought on “Close Encounters”