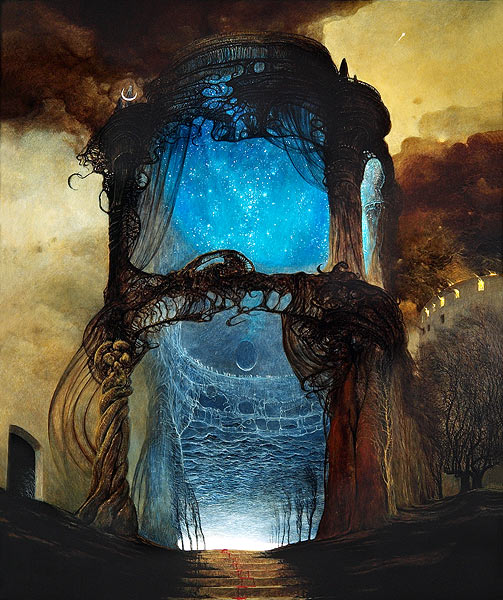 I am suspicious of hedonism: somehow it is a lie. Now I do not believe myself to be any more incapable of lying than the next person, but I do hold integrity as one of my core values: I do not believe that one can live a fulfilled life when one is consciously living a lie. So as I decry hedonism, I do not wish to do so from atop my moral high horse. I will saddle up in future posts, but for now this is not a rant about the decline of morality, it is a mini-expose of the lie that underpins both hedonism and obsessive piety.

As I was performing the tedious ritual of negotiating traffic this week, I endured with quite remarkable forbearance the rallying cry of ‘let’s get drunk and have sex’ that has come to characterise modern music. By the way, given the frequency with which I moan about this issue, you would think I would simply change radio stations or put on a cd. Unfortunately, Nathan – in a two-year-old attempt at scientific inquiry – put one of my store loyalty cards into the cd player and I have been unable to get it out. The result is that for several months I have had to endure what is on the Johannesburg radio stations, and regrettably gospel metal never makes the playlist.

But this post is not about condemning lifestyle choices, nor about the deplorable lack of taste among the general public that has allowed mindless art to thrive. It struck me, as I was listening, that humans invest a quite staggering amount of energy into not thinking about mortality. So much of what comprises popular culture – our fervent following of sports-teams, the pathological aversion to silence evident in the constant need for music, 24-hour-a-day television, much about religion and spirituality – is really just an attempt to resist thinking too deeply about the brevity of life and the vastness of eternity.

We are utterly insignificant in the greater context of time and space. It is not easy to stare into the emptiness of a universe indifferent to our existence as a species, let alone as individuals, and accept just how meaningless our lives – our sufferings and triumphs – actually are. So I understand the compulsion not to look. It is easier to pull the curtains of popular culture across the window to the universe and pour another drink. But that doesn’t change the fact that it is a lie.

No matter how hard a truth is to swallow, living comes with a greater sense of peace once we have accepted it. I suspect that meaningful art is merely a way of repackaging our terror at our insignificance and mortality so that we can look at it without falling into complete despair. Art helps impose a beauty onto our transience. It is part of why we so desperately need art. And it is why hedonism in art annoys me. It is cowardly. I don’t expect art to be moral but I do expect it to be courageous. So I applaud the lyrical cynicism of Swinburne, the metaphysical wrestling of Hopkins’ dark sonnets, and Arnold’s plea in Dover Beach:

Ah, love, let us be true

To one another! for the world, which seems

To lie before us like a land of dreams,

So various, so beautiful, so new,

Hath really neither joy, nor love, nor light,

Nor certitude, nor peace, nor help for pain;

And we are here as on a darkling plain

Swept with confused alarms of struggle and flight,

Where ignorant armies clash by night.

Despite their vastly different religious affiliations, I will never fail to connect with Kandinsky, van Gogh or the recently discovered Zdzisław Beksiński. Writers as diverse as Ian MacEwan, Jeanette Winterson, Thomas Hardy, J.R.R Tolkien and Terry Pratchett will always touch my soul, and I can be equally moved by music by Mozart or Marilyn Manson. A good choir is as likely to stir something in me as meaty riffs on electric guitars. And I think the reason is this: I respect the courageous defiance of staring into the void and choosing to sing. 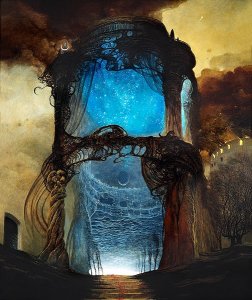 From our very¥ limited perspective, the sheer vastness is terrifying. Just a glimpse will be enough to convince you that everything you thought about God and yourself was wrong. The smallness of our self-imaged God-projections will crumble, to be replaced either by an infinitely more humbling picture of Him, or one in which He is impossible. Either revelation takes enormous courage. Constantly staring out of that window will drive you insane, but you do have to look every so often. It provides a healthy dose of perspective. The knowledge that, as Solomon notes in the book of Ecclesiastes, “everything is meaningless” is enormously liberating in its way.

So to all those of you who have dared to stare out into the void, and whose perspectives have been irrevocably changed, I salute you. To those who are starting to recognise that they have been avoiding the void, I dare you to look. Look past the familiar philosophies explaining what is there to actually gaze upon what is there. Look beyond the comfortable pleasures that shield you and try to face eternity. The result will look a lot like Tennyson’s revelation in In Memoriam:

So runs my dream: but what am I?

An infant crying in the night:

An infant crying for the light:

And with no language but a cry.

You will never think about God in the same way, but your faith – or lack of it – should be far humbler and more genuine for it.

One thought on “Avoiding The Void”