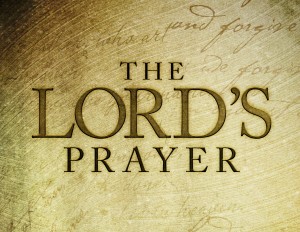 I was struck by something Michael Hardin said (much of what I am about to say about the Lord’s Prayer in the next few posts is derived from his talk here): a prayer is a theological statement. Every time we open our mouths to pray, we are giving utterance to our theologies. If we find ourselves generating Christmas lists, it speaks volumes to how we believe God ought to relate to us, and should provide a sobering warning as to how we are likely to respond when we don’t get what we want (either blame God or our own lack of faith, neither of which will lead to a healthy spirituality); if we find ourselves begging for mercy constantly because we are miserable worms, then we need to re-examine whether or not we genuinely believe in a God of love and forgiveness. Our prayers, much like our choruses and hymns (which is why I have come to be suspicious of Christian worship),both articulate our theological beliefs and give shape to them. So when we read of one of Jesus’s disciples asking Jesus to teach him to pray (Luke 11), we ought to pay attention.

If we want a summation of Jesus’s theology (and really, if we call ourselves Christians we should be making a more concerted effort to understand that), then we are about to get it. Can I tell you what the decision was that has most influenced my faith in recent times? It was the decision to actually centre my faith on Jesus. I know how strange that sounds coming from somebody who has called himself Christian most of his life, but for too long I would have been proud to call myself a “Bible-believing Christian”. The problem with adopting that label is that it has the wrong centre. A Christianity that centres on anything other than Jesus is no Christianity at all. And that is true even if the alternative centre is the Bible. It leads to us spending too much time defending the credibility of the Biblical writings (and whether or not you like this fact, the doctrine of the infallibility of Scripture does not stand up to any honest intellectual scrutiny) and not enough time wrestling with the teachings and ethics of Jesus. While they occasionally overlap, they are not the same thing. I am not a Bible-believing Christian, I am a Jesus-believing one.

To illustrate why this is an important distinction, let me borrow something I found in the Clarion Journal, by Richard Murray. If we consider Jesus and God to be one (and that really is foundational to any sort of Christian theology), and if – as we claim – God never changes, then you could theoretically substitute Jesus’s name in for “The LORD” at any point in the Scriptures. With that in mind, can you spot the problems with the following statements?:

“Joshua destroyed all that breathed, as the LORD [Jesus] commanded.”- Joshua 10:40

“The LORD [Jesus] delivered them before us; and we destroyed the men, and the women, and the little ones.” – Deuteronomy 2:33-34

There are dozens of other such examples in the Bible. So many, in fact, that anyone who actually reads the Old Testament histories instead of wilfully glossing over them (which, I confess, I used to do. They really do make for uncomfortable theological conundrums), cannot but be struck by how starkly they contradict everything about Jesus’s ministry. If Jesus is God and all of the depictions of God in the Old Testament are true, then God is a deranged tyrant. I do not believe that to be true, which means, I think, that we are compelled to choose sides. One thing seems abundantly clear to me from all of this: if you take Jesus seriously when he says that anyone who has seen him has seen the Father, then you have to reject the claims of many of the Old Testament writers to be speaking on behalf of God. That certainly has been my experience. I found myself pondering: if Jesus, and not the Bible, provides the more accurate picture of the nature and will of God, what does that mean for my theology? And suddenly I found myself in the bizarrely unfamiliar territory of trying to make my Christianity Christ-centred (and even more bizarrely, being criticised for it). Now if I want to honour God, I find myself asking not “what does the Bible say?” but “what does Jesus say?”

What has come to be known as The Lord’s Prayer is a great place to start. The problem is that we are so familiar with it that we ignore what it means. We think we know it, so we don’t explore it. Blinded as we are by our Evangelical and Post-modern paradigms, we assume we understand what Jesus meant. We don’t bother to ask what he meant as a 1st Century Jew.

Let us understand something: Jewish people are not a people unfamiliar with prayer. The request from the unnamed disciple is almost certainly not coming from a position of ignorance: “What the heck is this prayer thing and how do we go about it?” What is not being asked, but which is characteristic of how many of us today, even if implicitly, regard prayer, is: “What is the secret to unlocking God’s power, the trick to getting the hand of God to move?” Any reasonably orthodox Jew of the time would have had a fairly regimented prayer life, and I am certain all of the disciples fell into that category (one doesn’t simply up and follow a would-be Messiah unless one has already formed a fairly firm connection to the belief-system that produces said Messiah and gives context and meaning to that Messianic figure’s teachings): prayer was part of Jewish culture; it was not simply a religious expression.

Since long before Jesus, right up until today, the Shemah prayer has been a part of everyday Jewish life. So has the Amidah. I don’t expect you to know what those are now – although more and more it baffles me how ignorant of Judaism Christians (including myself) are, given how deeply rooted Christianity is in Jewish thought and culture – but they are fundamental to beginning to unpack the theology of the Lord’s Prayer, so we will be looking at them a bit more closely in coming weeks. For now, I need you to accept that these disciples are already praying men. They do not need to be taught the spiritual benefits of prayer. They have recited the Shema and the Amidah every day of their lives since they were boys. They have them memorised. They are not asking how to pray. They know that. But Jesus is a possible Messiah and if they are to take him seriously, they need to understand how he responds to the big Jewish questions of the day. What is being asked is very simply: “So what do you believe?” When the disciple adds to his request that Jesus teach them to pray “just as John taught his disciples”, the implication is clear: John has interpreted our beliefs in a way that his followers regard as a ‘superior’ expression of faith; what do you have to offer, Jesus? What’s new?

Now if, like that disciple, we are genuinely interested in what Jesus believes (which we ought to be, because that will give us insight into what God is like, if we accept Jesus’s claims), then we really ought to be paying more attention to Jesus’ response than we normally do. And as always, Jesus’s response to the question is subtle, brilliant, and subversive. In case you did not notice, Jesus is in the habit of reconceptualising Jewish faith and culture. By that I do not mean that he is rejecting it, replacing it, undermining it. No. He redefines it. At no point did Jesus set out to start a new religion; his mission was only ever to help people properly understand what was already there. And this prayer does just that, precisely what the disciple was asking him to do. If you begin with that in mind, rather than trying to fit Jesus’s teachings into a post-Reformation “Jesus-is-my-boyfriend” paradigm, you will see the gospel in a new and much more radical (and dare I say beautiful) light. It is simply intellectually dishonest to give more credence, as we do, to the influence of Luther and Calvin and Zwingli on Christian theology than to Judaism. Yet while most modern preachers will be familiar with Calvin and Luther, I doubt many have read the Rabbinic writings or are even passingly familiar with the cultural and political contexts within which Jesus taught and which would have given shape to his ministry. We trust Reformation theology before we trust Jesus’s.

It is sad, actually, that in all my years of membership in various denominations of the Protestant and Evangelical churches, I have yet to have anyone connect The Lord’s Prayer to Jewish prayers, when the connection is so obvious and the implications so profound. I will explore this in more depth in the next few posts, but do yourself a favour in the meantime and look up the Amidah. One of the things that will strike you, even despite the many similarities to the Amidah, is how brief Jesus’ prayer is by comparison. As he always does, Jesus succinctly emphasises what is important, and is very deliberate in what he omits. I am not convinced that the Lord’s Prayer is a template for how to pray so much as it is a public statement of Jesus’s theology. And when I compare The Lord’s Prayer to how I pray habitually, and consider what that says about my theology – in other words, when I compare my theology to that of Jesus – all of the inadequacies of my beliefs are exposed, all my misconceptions of God are challenged. And I find myself faced with a tough choice: pick up my cross and follow Jesus or stay within the misplaced but safe and familiar boundaries of my theological culture. Just the sort of uncomfortable predicament, I suspect, that Jesus intended.