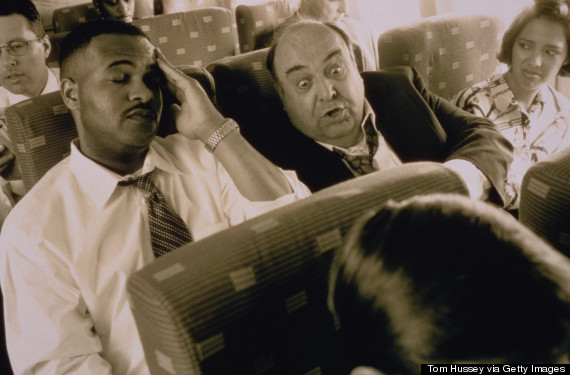 It was bound to happen, I suppose. You have heard of Murphy’s Law, right? If anything can go wrong it will? Well, when it comes to me, another Law holds true: namely, that Murphy was an optimist. It was a twelve hour flight and I got stuck next to a “talker”. Now I am a reasonably outgoing person, perfectly at ease among strangers and not at all threatened by the thought of holding a conversation with somebody I have never met. Unless that person is a “talker”, that is.

Engaging with a “talker” is not the same as talking with a normal human being. Not that we all aren’t, but I think “talkers” are enormously complex, psychologically speaking and perhaps more pathologically so than the rest of us. Now I am by no means trained as a psychologist, so read this with that in mind, but I would venture the following hypothesis to explain just what it is that enables somebody to feel that it is perfectly alright to speak familiarly with a stranger on a plane, to completely disregard all social cues that suggest such behaviour is inappropriate and unwelcome, and why it is that we get that twisted feeling in our guts when we see them coming.

I am willing to guess that most of us know a “talker”. Many of us have taken spontaneous detours or lingered a while longer at the tea station in order to avoid having to engage. I suspect that most of you can sympathise with the smothering, claustrophobic feeling that is the recognition that a “talker” has you in their web. Some of you (I have a confession…) may even have made pacts with others to interrupt with a ‘phone call’ or ‘meeting request’ if they notice that you are wriggling and helplessly struggling, further entangling yourself with every attempt to escape. If you cannot identify with this, you may well need to reflect on whether you might not be the “talker” yourself”.

I have worked in schools in some form or another for two decades, and have spent more time than many on planes. I have a lot of experience when it comes to “talkers”. There is no common denominator when it comes to gender, age or race. But they do nevertheless have a lot in common, at least they ones I have encountered.

The thing they most want to talk about is themselves. Now to the uninitiated this might make the “talker” seem egotistical and vain. I suppose in some way this is true. But I don’t think it is that simple (which is possibly why, when trapped, I often give them more time than I – in terms of psychologically healthy responses – ought to): I think the deepest need of all “talkers”, the one that unconsciously drives them – is a desperate quest for validation. “Talkers” will rarely, if ever, let you dictate the topic of the discussion, although they may (briefly) feign interest in a subject you raise until such time as they can redirect the discussion to themselves. This is not so much because they are egotistical (although “talking” is an egocentric activity) but because the “talking” is driven by a desire for personal validation that cannot be met by a conversation on an issue that is irrelevant to that need: ie you. So I humour “talkers”, probably more than I should, (by listening; I never provide validation on an issue where I disagree with them), because I feel for them.

This particular “talker” was in the process of emigration. He was speaking loudly (so that everyone could hear, no doubt) about how South Africa was going to the dogs and that nobody reasonable would stay. Now please hear me on this: I can appreciate this perspective and the desire to emigrate. My issue with this “talker” is not with his opinion, but with his mode of expressing it. I believe that people should have every right to take their families to where they believe they are safest, whether or not I happen to agree with the reasoning behind the decision. My issue with not only this “talker”, but “talkers” in general, is that their need for validation often results in other people’s equally valid choices being belittled. “Talkers”, in a way, are bullies. And I don’t have much time for bullying.

This, by the way, is my issue with much of what passes for evangelism and teaching in the modern Christian churches. There is a rigid refusal to actually engage with alternative opinions and viewpoints, and there is often a hostile repression of dissenting voices, especially of those that come from within the church structures. Too much evangelism is an attempt to bully or emotionally manipulate people into faith, rather than to allow the rich and robust debates, arising inevitably from different personal understandings of an invisible God, to happen naturally. Too many churches are “talkers”.

Eventually my “talker” let me go. It could be because he noticed that the book I was reading was Slavoj Žižek, the Slovenian philosopher’s take on the refugee crisis in Europe. Not that he would have known who Žižek is, of course, but I was holding the book open so that when he read over my shoulder he could see select passages (on which I lingered) where Žižek observes that both the refugee crisis and the threat of terrorism in Europe, as well as poverty and violence in developing countries and the Middle East, stem from the same source: the influence of global capitalism. I hoped he would finally realise I could not be converted, if he had not already picked that up from my steady refusal to agree with him as he spoke.

It could also have been that the person on the other side of him was female, and perhaps applying his “charm” to her would potentially result in a greater validation of self for him than I could ever, even if I were to play along, provide. I have to confess that I was grateful when he turned to her instead.

It could have been, of course, that I chose to sleep. That’s the kind of social cue that even a “talker” cannot miss.

*Dear regular readers. I still have a few work things to wrap up, but the chaos is settling and I can get back to more regular writing now. I will return to my discussions on history and the Jesus after I have spent a few posts talking about some of my reflections while abroad.