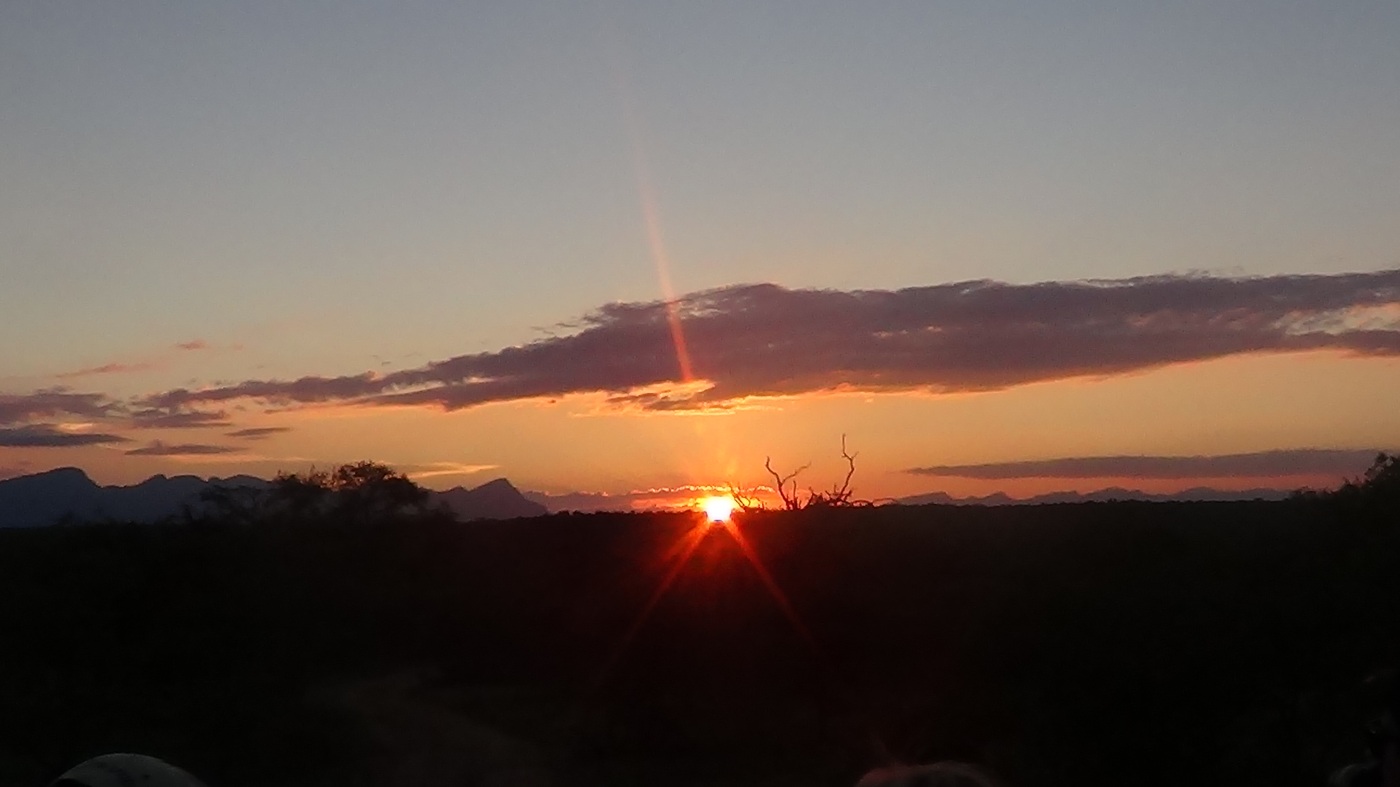 As long as I can remember, I have loved the bushveld. It is one of the few places where I feel completely alive and free. There is an immediacy about life in the African bush that I find wholly alluring. When you are walking in the territory of lions and elephants, for example, your regrets and your failures, as well your ambitions and dreams, are completely irrelevant. Now matters. Only now. And there are no pretensions in the bush: whether you are rich or poor, no matter what your culture or language, you are insignificant before the circle of life. Nature strips away the lies and the masks, and leaves us gloriously , nakedly, ourselves.

Last week we took Nathan to a game reserve for the first time. He loves animals, and I knew just the place to introduce him to the siren song of the savannah. He was absolutely enthralled by it all, as I knew he would be, and he kept referring to our cottage as his “new home”. He had a million questions for the ranger, and wanted to interact with everything he saw. Like me, he has Africa in his blood.

And then, on the morning we were leaving, this happened: 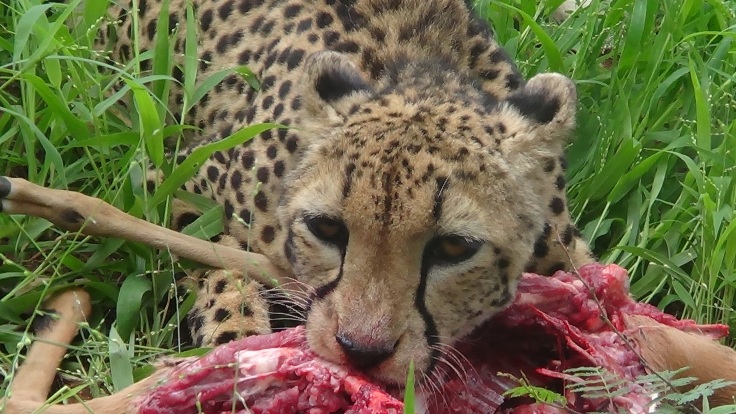 We were walking through the bush when we came across a cheetah on a kill not more than twenty minutes old. It was a baby impala (probably not much older than a week). I couldn’t stop Nathan from seeing it, and he stared for a while. “Is that a baby?”, he asked. I said that it was. “Where is the mommy?”, he asked. I told him that she had run away. “Why is the cheetah eating the baby?” I replied that cheetahs ate other animals, and emphasised that this was why I had told him not to run if he saw any big cats. I did not want them seeing him as food. “I don’t think I would eat the baby”, he concluded. My heart broke. The rest of the group wanted to stay for a while, and I could hardly refuse. So Nathan was there for longer than I would have liked, because it would not be safe to leave the group or the armed ranger. So we waited amid torn ribcages and exposed organs, and the sounds of breaking bones and tearing flesh. He was quiet after that and wanted me to carry him for the rest of the walk.

Maybe I am projecting, but I felt like such a traitor. Nathan has not mentioned it much since, but I still know that it made a lasting impression; that he was robbed of something that he can never regain – a sort of innocence. And I exposed him to it. I remember vividly the first time I saw a kill. I watched as a pack of wild dogs (my favourite animal) tore apart a small impala. It moved me deeply, and there is a clarity to that memory still, even though it is decades old. And I can’t help but wonder how this similar experience will shape my son. What will he feel when this moment replays itself in his mind?

As I reflected, it struck me that absolutely everything we saw had evolved either to kill more efficiently, or to avoid being killed. I was struck by how much death he had actually witnessed – from the bushbaby around the campfire catching moths and flying ants with ruthless efficiency, to the scorpion we watched catching insects, the kingfisher plunging into the pool to spear a fish, and even the crocodile that waited by the water’s edge, watching for Nathan to come close enough to snatch.

And one of my favourite poems came to mind:

In the forests of the night,

What immortal hand or eye

Could frame thy fearful symmetry?

In what distant deeps or skies

Burnt the fire of thine eyes?

On what wings dare he aspire?

What the hand dare seize the fire?

And what shoulder, & what art,

Could twist the sinews of thy heart?

And when thy heart began to beat,

What the hammer? What the chain?

In what furnace was thy brain?

What the anvil? What dread grasp

When the stars threw down their spears

And water’d heaven with their tears,

Did he smile his work to see?

Did he who made the Lamb make thee?

In the forests of the night,

What immortal hand or eye

Blake understood the dilemma that I feel too many Christians ignore: if every artwork reveals something of its creator, what does nature say about God? The African bush has – all my life – been a spiritual place for me. But as much as it is breathtakingly beautiful, it is also unequivocally brutal. What does this say about its maker? I have no answers, really. If you are looking for them, I will disappoint you. I have meditated on the question a lot, but have no satisfactory responses. However, I work on the assumption that if suffering is repulsive to me, it ought to be more so to a God who is said to exemplify the purest forms of the virtues that move me to revulsion at the sight of death. I do believe that the gospels testify to that.

When I consider the raw savagery of unadulterated nature, and I juxtapose it with the teachings of Jesus (the only revelation of the character of God I am prepared to trust), I am even more convinced that it is not my personal moral failures that preoccupy such a God. I do not believe that the focus of His redemptive plan centres on making me holy or subverting cosmic justice. No, I believe that the” wages of sin”, the death that Jesus’ death and resurrection are intended to nullify, concerns not so much my personal deliverance from the jaws of hell as it does a state of the world – a state of being – where death holds grisly dominion. His plan, as is reiterated throughout the New Testament , is about restoring the Kingdom (not about making me good). He is, I believe, in the process of restoring abundant life, of making – as indeed He has promised – a new heaven and a new earth, where the lion can lie with the lamb. And, for that matter, the cheetah with the baby impala. Where death is eradicated. I don’t know how Calvary accomplished that, nor why we do not see the process complete now, thousands of years afterwards, but I do believe that somehow that is what the crucifixion accomplished. Is accomplishing.

I long for the day when that work is finished. In Romans 8:22, Paul compares this waiting for the completion of God’s restorative work to a woman in labour: unbearable pain to be erased by the promise of new life. I trust that He will restore all things, as He promises. Right now, though, it seems the pain will never end. Each moment of respite – like a holiday in the bush – is punctuated by excruciating reminders of suffering and death. It is easy to lose faith. It is natural to lose hope. If, like me, you often find yourself in the awful silence that follows a loss of innocence, and you feel helpless and tired, know that you are not alone. I can offer only this: breathe. Trust that the present agony is the herald of the birth of a miracle. Accept that there is nothing you or I or anybody can do to change things. You are not in control of this process. Believe, although you cannot see it, that God will restore His Kingdom. But if the searing pain is too intense for trust, just choose to breathe. Inhale and exhale. And again. And again. Until the contraction ends. Just. Breathe.