It seems that every day brings news of another hate-based crime. As shocking as Paris was, it was certainly nothing new. And as I have done the necessary reflecting, in the wake of each heart-breaking story, I have been struck by the realisation of how much the world needs to understand and practise forgiveness. 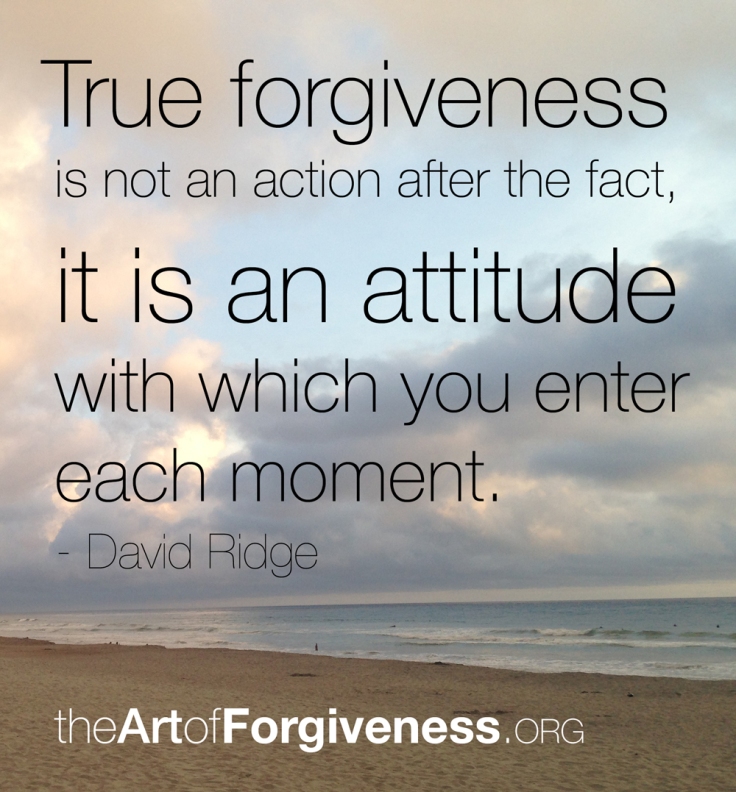 I do not think it is any coincidence that Jesus placed such a premium on our willingness to forgive. And I don’t think he did so because forgiveness is part of some recipe for personal salvation – not in the fire insurance sense anyway. I think he did so because the ability to forgive is a necessary precursor to a life filled with peace, hope and love. And as I have always maintained, I believe that Jesus’ primary purpose on earth was not to serve as a loophole in the system of cosmic justice, but to restore us to an ontological state of ‘life’, which we lost in the Fall. He stated that he came in order that we might have abundant life (John 10:10), and it should be obvious that abundance is a qualitative statement, not simply a quantitative one. To this end, Jesus’ teachings emphasise that love should underpin all interactions – whether with God or our fellow humans. It becomes increasingly clear to me that this is not possible if we cannot learn to forgive.

Consider these two teachings. One is on reconciliation and the other on forgiveness. I realise that these are separate concepts, but they are linked.

“Therefore, if you are offering your gift at the altar and there remember that your brother has something against you, leave your gift there in front of the altar. First go and be reconciled to your brother; then come and offer your gift.”

Then Peter came to Jesus and asked, “Lord, how many times shall I forgive my brother when he sins against me? Up to seven times? “Jesus answered, “I tell you, not seven times, but seventy-seven times.”

I am sure Peter thought that seven times was generous, and indeed, to forgive somebody  who hurts us seven times would demonstrate extreme forbearance. But Jesus’ response brings to light the flawed nature of Peter’s thinking about forgiveness.

As long as we are keeping a scorecard, as long as we hold that we ourselves are innocent in the conflict, we will never understand the other person’s motivations. We will see only hurtful actions and not the deeper issues of which those actions are a manifestation. Any attempt at reconciliation requires that we give up the myth that we are good and that we proactively seek to understand. It requires that we see the issue and not the person as the problem.

If we keep a scorecard, and see the need to draw the line at how many times we forgive, then we are seeing the other person as the problem. The dominant attitude then is one of arrogant moral superiority. But forgiveness can only be achieved through humility. When we realise that we cannot influence others’ actions through condemnation and when we acknowledge that the fact that we have been hurt is not the problem itself, but rather a symptom of the problem, then we are in a position to find peace. Only then can we move forward.

I like the way Jesus words it in Matthew 5:23-24. The emphasis is not on your “brother’s” faults, but on your own. The onus, if your “brother” (and I really like that choice of word – it makes us all part of the same family, of equal status in the eyes of God) has a grudge against you, is not on your “brother” to sort things out, but on you. The Christian response to conflict is never to point fingers, never to assume moral superiority, but to find the plank in our own eyes and to remove them so that we can restore the relationship (see clearly to remove the speck from our brother’s eye – Matthew 7).

So if reconciliation is the goal and forgiveness is a necessary step towards that goal, what is forgiveness?

Maybe a good place to start is to stress what it is not. Forgiveness is not an acknowledgement that being hurt is okay. The image that Jesus uses of having something in one’s eye is useful. The plank, or speck in the eye is painful and unnatural. It needs to be removed. I am sure you know the absolute agony of having something as small as a speck of dust scratching the eyeball. The pain is so intense that it completely dominates your attention. Until the speck is removed, you cannot focus on anything else. That is what conflict does. The pain of it blinds us to any other reality. We need to clear our eyes so that we can act appropriately to end the suffering.

Forgiveness does not say that the hurt is okay, but recognises that if we act out as a result of our pain we merely perpetuate the cycle of hatred. Forgiveness is the attempt to move beyond the pain, not the attempt to justify it. Forgiveness is not a matter of finding ways to justify others’ immoral actions, or to forget about them, or even to press a cosmic “reset” button, but of finding ways to move beyond our pain, of understanding where the planks in our own eyes are so that we can see clearly to address the root of the problem.  Forgiveness aims to end suffering, not to pretend it never happened.

You see, forgiveness is not about the past. Not really. It is about the future. It is, to quote Sue Monk Kidd, author of The Secret Life of Bees, “an evolution of the heart”. The primary beneficiary of the act of forgiving is the one who forgives. Forgiveness does not start by looking outward at the “perpetrator”, but by looking inward. It acknowledges the brokenness; it does not deny it, but it tries to move beyond it by addressing what caused the brokenness in the first place. Forgiveness is about refusing to be shackled by pain. It is about acting to restore life.

I came across a marvellous website called the Forgiveness Project. A moving starting point if you want to navigate around it for a while, which really illustrates more beautifully than I can the power of forgiveness, is Scarlett Lewis’s story, the mother of one of the children killed in the Sandy Hook Elementary School shootings in 2012: http://theforgivenessproject.com/stories/scarlett-lewis-usa/  I am not often teary, but her story is a testament to the life-affirming power of forgiveness.

I am convinced that humanity will be stuck in a quagmire of suffering; people will be crippled by despair, unless we can learn to forgive. My challenge, dear readers, comes with three alternatives:

2 thoughts on “Learning to Forgive”